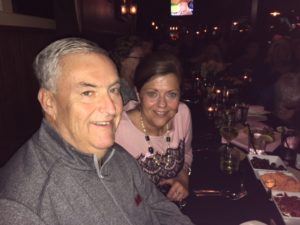 Lou Ann Hingley, Access Property Management’s Marketing Coordinator, held a dinner party at the Steam Pub in Southampton, PA. The dinner was held during breast cancer awareness month to celebrate the 10th anniversary of her being cancer free. The 1967 red Camaro was the chariot for the evening. Our own Patty Mullen-Smith, Vice President of Access Property Management’s King of Prussia region, was in attendance as well. Lou Ann is in the picture with her brother, John. Guests were not allowed to bring gifts. They were asked to “pay-it-forward” in some fashion. Lou Ann’s friends stepped right up the plate with donations. Donations included buying dinners for military service personnel and adopting several families for Christmas. A donation was made to a cancer charity. Food was purchased so that volunteers could cook dinner for a local hospice. Holiday wreathes were purchased for soldiers buried in Arlington and holiday lay-aways have been paid in full for several local families. It was a great night!